This is a page of links strange and phenomenal about Japan.  You can always count on Japan to make the lighter side of world news more interesting and since we live here, we want to share.

During rush hour in Tokyo, if you’re not willing to push your way onto the train, some one else will do it for you.  The oshiya, metro workers paid to push people from the platform into the train cars, bare the burden of rush hour rudeness.  This system began in the 1970s as commuting trends in Tokyo grew more rapidly than the frequency of running trains. Now perhaps non-existent in Tokyo proper, oshiya can be found in the suburbs in the morning pushing “salarymen” onto inbound trains to downtown Tokyo.  If you’ve relied on the NYC Metro during rush hour, your first response might be to wonder why these guys aren’t getting caned by the angry elderly or clocked by the always-doing-businessmen.  On the Tokyo Metro, the idea is that everyone knows they’ve got to work together to get to work on time.  Notice the polite tone with which the oshiya say “Onegaishimasu,” please.  Their white gloves are also a sign of respect showing that they’re not handling or mussing the commuters but rather helping them, careful of their clothing, onto the train.  If you happen to be a commuter, this is old hat for you.  You don’t protect your personal space or stand stiffly in the spot you desire, but just go with the flow until everyone is on the train.

Taking advantage of the hilly terrain in Okayama, Japan, the Washuzan Highland amusement park makes its guests work a little harder for their fun.  The Skycycle is a pedal powered roller coaster which runs up, down, and around an Okayama hillside and, like traditional roller coasters, has sections that appear genuinely exciting. The Skycycle’s carts seat two people cycling in tandem on a guide rail.  Each cart is equipped with a handlebar, seat-belts, and a little pink basket in front.

Thrill seekers will still be able to appreciate the rush of vertigo because, on the Skycycle, you can stop and look down.  Guests are also responsible for pedaling their cart over peaks as well and out of troughs; no more speeding around involuntarily.  The responsibility of pushing your cart to plummet up high on a hill seated on a bike with a seat-belt does seem just as, if not more, terrifying as the passive thrills of electric roller coasters.  More pictures available here.

“There’s nothing wrong with being naked.”

Legally, there’s often quite a lot wrong with public nudity and the consquences are extremely high if you are a public figure, a member of a popular boy-band (SMAP is like N’Sync circa ’98, we’re talking pop-u-lar), and live in Japan.  Last weeknend Tsuyoshi Kusanagi scored three for three when police found him loud, drunk, and nude in a Tokyo park.  For once I find myself agreeing with Tokyo mayor Shintaro Ishihara who felt there was no need to blow this incident out of proportion.  However, what is phenomenal is that the Japanese public insists on it.  Something in the cultural notions of honor, integrity, and humility makes this a very big deal in Japan.  Along with compromised honor (which in Japan doesn’t stop with the individual, but extends to colleagues, freinds, and family) Tsuyoshi faces the loss of endorsements, public criticism, and blacklisting from particular hotel and car services.  More than the press frenzy, the public condemnation has this intrigued writer wondering how must Japanese fans of Western music reconcile the gaffes of celebrities who hail from the lands of Lohan and Winehouse? 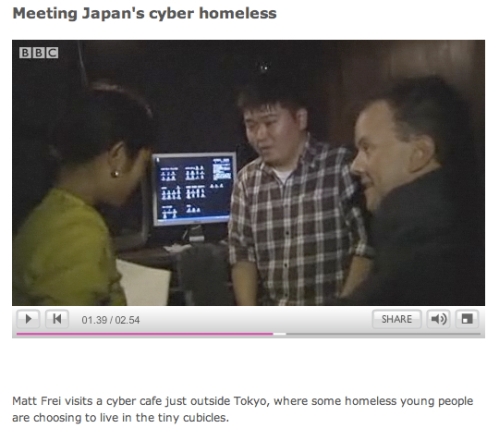 Homelessness in Japan looks a bit different. I remember our first night in Tokyo, walking around Shinjuku and seeing tidily maintained groups of elderly homeless men under a bridge, each with all of their belongings neatly stowed in plastic containers and lashed to push carts, ready to move. Each had a recent haircut and many had cats leashed to the carts. Just last month, Melissa and I came upon a shanty town underneath a bridge in Kyoto and it looked like a small city: each person had his own organized space, cabinets and drawers neatly converted to small rooms. They, too, had cats.

Now, with this story from the BBC, a new generation of white-collar homeless is emerging. Internet cafe culture here is unlike anywhere else; many people choose to pay to sleep overnight in a cafe cubical rather than an expensive business hotel. The people in this video, however, are permanent residences of the internet cafe, paying about $500 a month for a cubicle the size of a bathroom stall.

The highest-ranking sumo wrestler in Japan, 330-pound Asashōryū Akinori,took to the runway at a fashion show in Tokyo for the Shibuya Girls Collection. Asashoryu, the Mongolian-born badboy of sumo, was dressed inexplicably in a boy’s school uniform as he strode down the runway. Asashoyru was suspended in 2007 in a controversy involving medical forms and a soccer match. Read the full article at: http://search.japantimes.co.jp/cgi-bin/nn20090310a7.html

In an annual festival held outside of Tokyo, the participants wear loin cloths and slosh around in the mud in frigid February to gain good health and the promise of a long life as they face the coming year. Watch the Reuters video: http://www.reuters.com/news/video?videoId=99406&videoChannel=72

It’s what every house needs, but no one has done right since the construction of Nijo Castle in Kyoto. Constructed in 1626 as a residence for the Tokugawa Shogun, Nijo Castle is equipped with uguisubari, or Nightingale flooring, that chirps when walked on. Visitors walk through the corridors looking in on the immaculate tatami rooms once used by the Imperial Court, admiring the murals and the woodcarving, and all the while the enormous cyprus floorboards creak beneath their their feet. To dispel the magic, the gigantic nails used in the flooring are designed to rub against clamps thusly chirping like birds and alerting the guards in case an assassin should try to sneak along the palace halls. The softer ninjas walk, the louder the boards creak. This bad cat was not supposed to use a camera in the castle, but here is a video of the floor in action: http://www.youtube.com/watch?v=jJThECzA1bc&feature=related

This post is also featured on the Japan page.

A nearby prefecture has found enough gold in its waste to rival the output of the world’s top mines.  Suwa waste facility notes its proximity to precision equipment manufacturers, which use gold in production, as the cause of this new source of wealth. Suwa estimates it will find 15 million yen worth of gold residue in its waste by the end of next March.  Read the article: http://www.reuters.com/article/wtMostRead/idUST8310320090130

The title says it all…but I really want to say more!  I was all ready to write “In Tokyo…” but this phenomenon actually originates in Osaka.  To add to the list of Japan’s themed cafe offerings, one can now enjoy a quick purr session with a feline friend–without all the litter duty and early morning feedings. Read bento.com’s review of one such cafe: http://www.bento.com/rev/catcafe.html

Young Tokyo women write racy novels on their cell phones and use data-sharing sites to post the text in parts.  While the writers’ identities are kept secret from their families and their public, these books are topping the charts. Read Dana Goodyear’s article in the December 22, 2008 New Yorker.

Japan does a lot of research in to sustainability and innovative ways to conserve and generate electricity but that technology rarely makes it outside a press conference. Japan Rail East, however, has installed piezoelectric flooring in the turnstiles of Tokyo Station. JR East claims they can generate enough electricity every day to power the turnstiles and computers just from people stepping on the floors.

After the doldrums of office work, Japanese salary men and women and can now ease the tension by breaking stuff.  It’s called smash therapy, and is a newly offered pre-happy hour activity in Tokyo.  Video on Reuter’s:

One cafe is getting a lot of buzz from its newly famous blogging houseplant.  The plant sits on the counter, wired with special gadgets for transmitting (and translating) its mood, while intrigued guests and passersby are drawn near by inspiration or disbelief.  Watch the video reporting:

Men at Work: Artisans of Old Japan, from Slate.com

A photo-journalistic series on old master craftsmen in Japan who are the last members of the dying artisan trade.

These Tokyo men, who never tell their wives they love them, come together at a yearly event to shout their love in a public park.  Watch the video and allow your mouth to drop in comedic awe at the honesty of the last shouter.